One year Recap – We are growing!!!

Every so often I run into a friend that asks about this blog. It’s usually followed by an excuse of having little time (to no time) to write. While that is all true, I must admit that the first year of renovations and daily updates were the busiest I have ever been in my life. Sitting on the verge of 40 years old, I realize that if I plan to be ambitious, now is the time. I only half-joke about that…especially since I do find my energy levels and weight-gain going in opposite directions. (still half-joking) Mid-life crisis aside, I wanted to share the last year with my friends and family.

First off, our family is growing at a pace much quicker than my home repair tasks. What was two, is now 3..followed by a fourth in less than a month (give or take two weeks). Before we get to our fourth member of this blog, allow me to introduce you to Dallas.

Dallas is our Blue Weimaraner. According to my wife who was suppose to bring back a male pup, Dallas chose her and there was really no other thing she could have done. I hate to admit it, but she was right. Having never been a pet owner, I have to admit its pretty awesome. I find having to restrain myself from bringing out her picture or working her name into a conversation. Seems I have become the kind of person I used to make fun of. With that being said, here’s 1 more pic of Dallas (now 1 years old as of July 14th).

Her usual morning beg which consists of sad eyes and wagging tail. Quickly followed by us letting her lay on the bed while we get ready.

Now onto our latest member of the family. As I type this, we have yet to meet our latest addition, but are very certain that he is a he. We are certain of this as he made it very clear during our gender reveal doctor appointment. Inappropriately so. Having taken 3 years to manifest, we named him Desiderio, meaning “one who is hoped for”. A name that always requires a second or third pass to people that first hear it, becomes much more familiar when we inform them of another person that held that name, Desiderio “Desi” Arnaz.

The house has had some work too. But that’s another post. In the meantime…here’s a preview of Desi’s Room I took with my phone. Stay tuned for better pics coming soon!

Going for a retro industrial and atomic look. That’s a mouthful!

Filed under Our life happenings

First project completed!!! Although they weren’t part of the original plan, the driveway-side windows are all installed and now a thing of the past. Enjoy the picture time-line.

Originally, the plan was to cover the window in the kitchen and bring in more light by installing a French door at the back entry. After discovering the great prices of Pella-brand argon double-pane windows ($120.00 for a 3×5 window) from Lowes, we immediately made room in our budget for these windows. My savings scheming also helped.

I first started by removing all of the existing windows I planned to replace. I did have mixed feelings because the original double hung windows were in such remarkable shape and I knew with a little bit of cleaning, sanding, wax and paint, these windows would last another 50 + years. 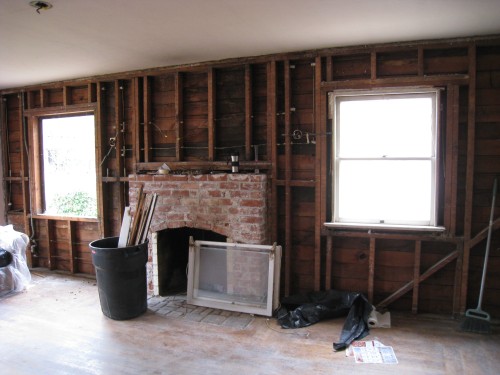 After I removed the windows carefully (I saved everything and will find a use for them somewhere down the road), I then cut out the exterior stucco to make room for the new and larger windows. The two windows in the living room went from 3×4 to 3×5. The window in the breakfast nook went from 40″x48″ to a whopping 5’x7′.

Next step was to frame up a new opening for the windows, including a new header for each window.

After, self adhering flashing was laid onto the exterior side of the frame to prevent water leakage. Then a bead of silicone was applied just before the windows were screwed to the frame. 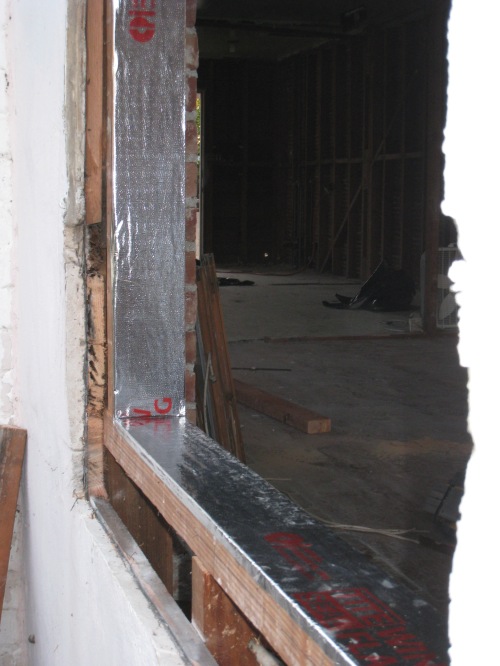 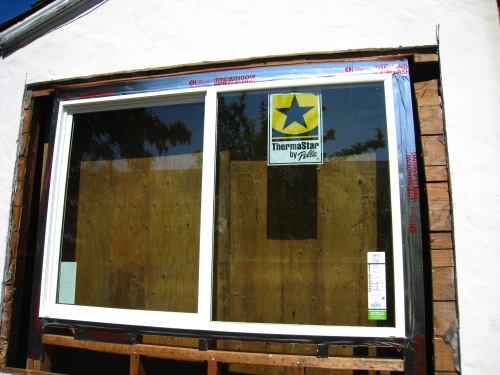 After the windows were screwed to the frame I ran another strip of the self-adhering flashing over the vinyl frame just to provide a final water-tight seal. The final touch of the exterior work was to apply plywood and brick mold trim around the new windows for stucco….once it happens somewhere way, way down the road.

Finally, the final (it really feels good to use the word final, even though its all so far from finality) touches to the window were on the inside. I trimmed up the interior frames for sheetrock (which goes up soon).

Huge sigh. Now to divert my attention to the other million things to do before the wedding….which is now exactly one month away.

After the past Easter weekend with the family and some staged frolicking with my wife, it was back to business on the house this week. Monday was completely shot due to elimination hockey where my beloved San Jose Sharks came out victorious and  moved on to the next round in the playoffs…WOO-HOO!!!

So it was back to work Tuesday night where I needed to get insulation on the walls if I plan to keep to the schedule. After a few hours of post-work work, insulation is all up. 80% of the strips needed to be cut because none of the studs were equally placed…errrrr! A couple more days of some final clean-up and hopefully sheetrock goes up next week. 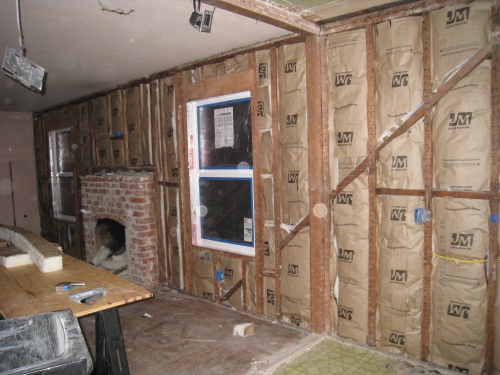 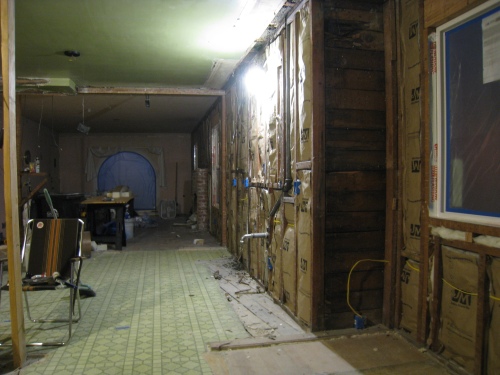 No new progress pics to post…so I thought I would share an idea board in progress. These will probably evolve, but here some info in some of these items.

The chiasso.com mirror is listed at 388, but every so often they have a 20% off sale. Which brings it down to 300! The copper glass mosaic tile are from Lowes. Here’s the really great news…they are only 7.99 a sheet!!! Wow! I found the vintage chair with a “free” sign on it last week. I have almost 20 vintage cameras and probably over 2000 LPs. We were thinking of having a chair-and-a-half in lieu of a sofa and maybe a leather club chair which I’ve always loved. Probably not in red though…well, this is still evolving. Hope you like! 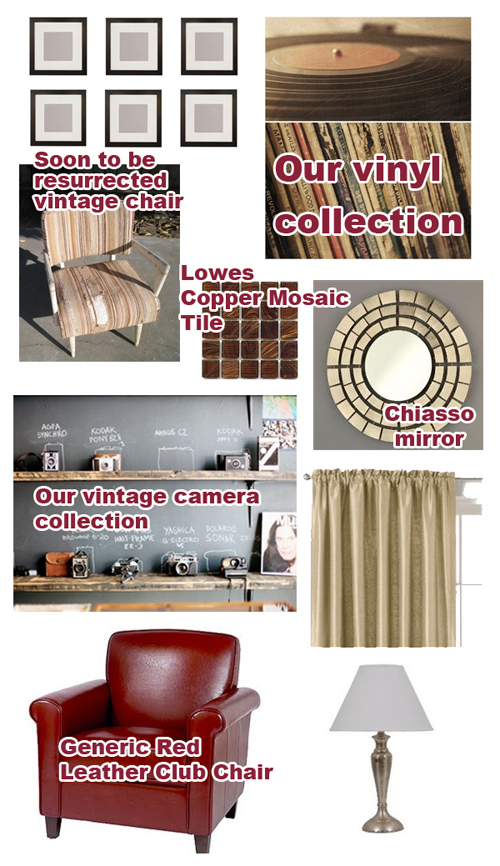 Livingroom Idea Board... In progress

Just a short post ago, things were dire and I was close to the edge. But just as soon as I was down, now I’m on top of the world ma! Things are looking up thanks to two great finds yesterday, just sitting on the side of the road with a “free” sign on them. The first find is a really cool 50s or 60s stationary rocking chair. You think its just a chair, but then you sit down and realize it rocks too!!! I am super excited to restore this once the house stuff is completed. Tons of potential! Check it out… 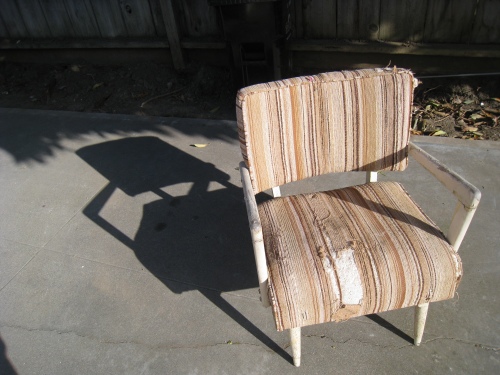 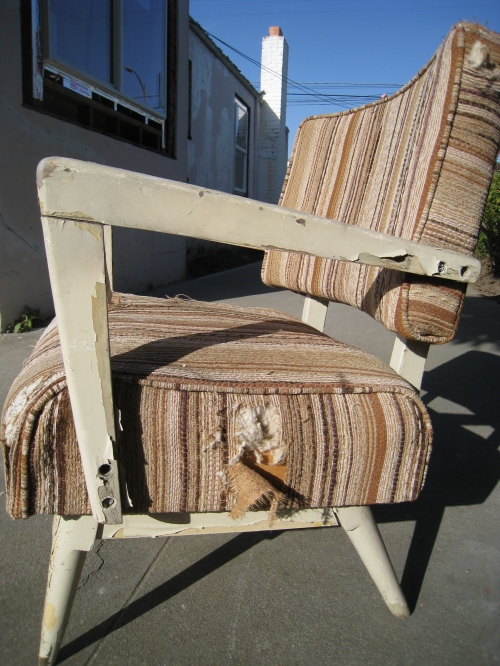 This second find is just as equally as impressive. A bucket full of vintage white porcelain pull knobs. There’s got to be over 200 here. The stems and screws are brass and even have a patina to them….awesome!!! Now I have a renewed energy and back to hitting it hard tonight…booya!!! 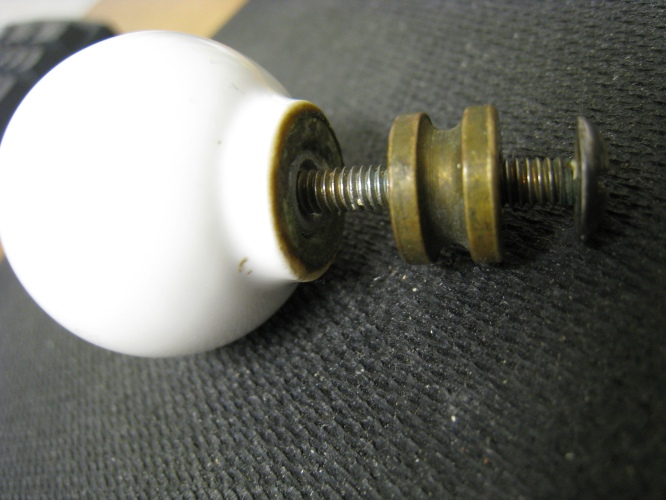 As promised,here’s how things are progressing via some photos of these past few weeks…

Left side of house - before (view from driveway) 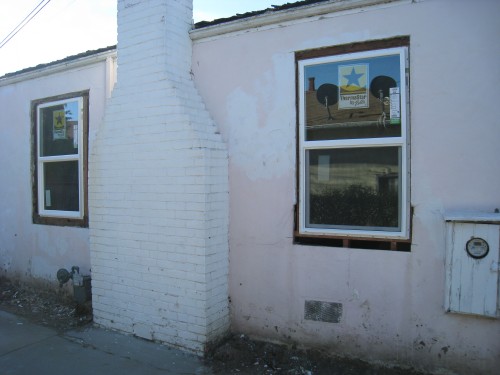 Front - new windows (with my sexy Dana, not available at Lowes)

ok, back to work…
-jerry

Hey everyone,
Since I forgot to upload pictures again, I felt compelled to share a little savings secret with you. Last night, I was able to save $100.00 dollars on an $800.00 purchase at Home Depot and its really simple!

Step 1 – Goto http://www.homedepotmoving.com/. On the lower left hand corner, slick the “Join Now” button. You will fill out a small form and within 10-30 minutes, you will be emailed a 10% discount coupon! You can only fill it out once every 6 months. However, if you are creative enough, you will realize it is per email. I’ve shopped at Home Depot enough to know that you can get 10% discounts all day long, you just have to know how to convince the cashier to give it to you. However this is a great way to get it if you don’t feel like asking for it. FYI – Cashiers are allowed to give upto 10% discounts without manager approval so it doesn’t hurt to ask.

If you prefer to shop at Lowes, then you can goto http://www.LowesMoving.com You just wont be able to get the additional 3% discount I explain in step two! This normally takes upto 3 days to get the email with the link to the 10% coupon from Lowes.

Step 2 – Home Depot Pro Rewards Number. During checkout, you have the option to enter your Pro Rewards phone number. If you have spent over 50k the previous year, then you can save upto 3%. Lucky for you, I have. So you can use my #. Enter 408-578-9519 as the Pro Rewards Number, then when they ask for a PO, enter “Spanish Charmer”, that way I know it was a referral from this post.

That’s it!!!! Hope this helps and saves…
-jerry

The Spanish Charmer
Blog at WordPress.com.